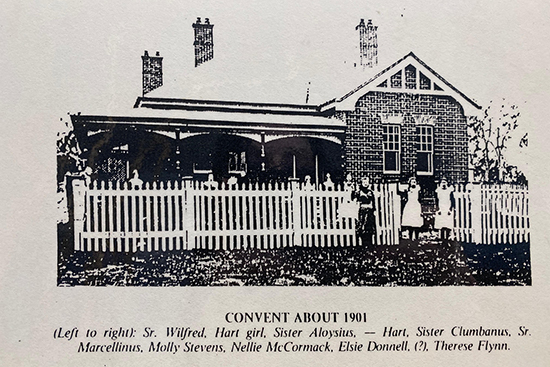 In 1829 Governor Darling was instructed by the Home Office to set aside some land for long-serving army veterans. Ten lots, each of 100 acres, were surveyed on Dapto Creek and Mullet Creek. One of the lots was granted to Elizabeth Mallon, widow of Richard Mallon, one of the veterans. She remarried and, as Elizabeth Cray, gave four acres to the Catholic Church for a cemetery and chapel. Her gift of land was to become known as West Dapto Catholic Cemetery and it appears to have commenced as a burial site about 1830. A wooden chapel was constructed adjacent to the cemetery by 1838.

In 1839 a school for Catholic children was opened in the chapel building by James and Eliza Hayes at which they taught from 1839 to 1841. James Hayes died in January 1845 and was buried at the old Wollongong Catholic Cemetery. Inscribed on his headstone after his personal details is one word: Teacher.

Thomas Frawley, from County Clare, Ireland, began his teaching career at Dapto in 1858 and subsequently served at Orange, Dubbo and Bathurst.

In 1880 three Sisters of St Joseph assumed control of the West Dapto school. They were Sisters Aloysius Lenehan, Eulalia McDermott and Ann Christie. Parish Priest Fr Augustus Petre vacated his presbytery, which would be used by the Sisters as a convent and schoolroom, as the old school was only a slab room. In his visit to Dapto in 1880, Archbishop Vaughan "reflected on the benefits to occur to the district, by having such devoted and unselfish teachers placed among them". Mary Mackillop visited the Sisters at Dapto in 1883. Their school was known as St Joseph's until 1968.

In the late 1880s it became obvious that the town was not going to develop at West Dapto, and that the church, school and convent would have to move. In 1900 Cardinal Moran blessed and opened a new convent in the town and Monsignor O'Brien blessed and opened a new church. The school was conducted in the convent, which is the current school administration and, after a few years, a wooden building was erected that served as a school until 1958. The weatherboard building was located on the site of the current school library and was in fact, the old church/school from West Dapto.

The early 1900s were years of great hardship, and, as well as conducting the school, the Sisters cared for several orphans who were accommodated on the verandahs of the convent. In 1959, six new classrooms were built. St Anne's College, a Years 7 to 10 high school for girls, was opened in 1965 and was extended in 1975. In 1983 St Anne's closed and St John's regained the use of these classrooms. Sr Jan Cetta was the last principal of the Sisters of St Joseph. In 1997 Marie Debusch became the first lay principal of the school and she was followed by Michael Connelly, Vicki Attenborough and presently, Andrew Heffernan.

In 2011, the Australian Government's Building the Education Revolution program saw the construction of a new library, meeting room and some minor refurbishment of the school offices.

Today, St John's is a systemic three-stream co-educational school catering for approximately 600 students from Kindergarten to Year 6 as well as a specialist setting for children with autism. In 2018, a major building project commenced, involving a redevelopment of the school site as well as the amalgamation of the previous two campuses (Evangelist and MacKillop). The school is now located on one site in newly constructed and refurbished modern facilities, following the completion of the building project in 2020.

Our Catholic Identity and Parish

Caring For The Environment